NO ABIB IN ARIZONA; ABIB REPORTED IN ISRAEL; EGYPT?
(March 2002 was a year for learning) 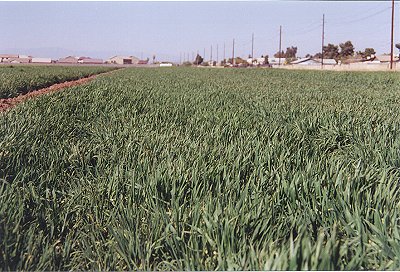 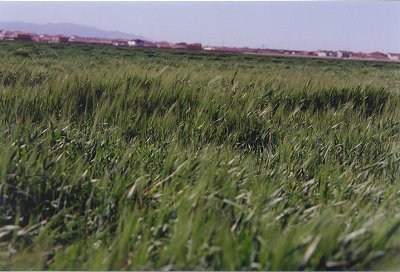 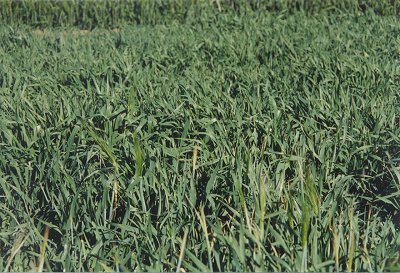 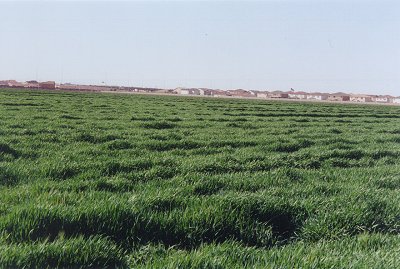 Exod 9:29 (NIV) Moses replied, "When I have gone out of the city, I will spread out my hands in prayer to {Yahweh}. The thunder will stop and there will be no more hail, so you may know that the earth is the {Yahweh's}.
Exod 9:31 (NIV) (The flax and barley were destroyed, since the barley had headed and the flax was in bloom.
Exod 9:32 (NIV) The wheat and spelt, however, were not destroyed, because they ripen later.)

"BECAUSE THEY RIPEN LATER" is what is says, meaning flax are barley were destroyed because they were currently ripe.  So the barely and flax were ripe!  This means the barley was at least at the "maturity" stage, which is yellow and brittle. Imagine what hail would do to brittle barley plants.  The seeds would fall to the ground making harvest of them an impossible task.

The above pictures show very green fields of barley.  None of the plants are even near "maturity" where they would be yellow and brittle.  Arizona barley is not at Abib.  Tomorrow is the new moon of March 15, 2002.  None of this barley would be ready for a first fruit offering in two weeks.  There would be no seeds in the plant for grain for the offering.

A group in Israel has reported today (March 14, 2002) that they found "Abib" barley in several places in Israel.  Was this an early developing variety of barley?  Is it the same variety of barley that was destroyed by the hail in Egypt in Exodus 9:31?  Was the barley in Exodus 9:31 early in the head or late in the head?  This event in Exodus 9:31 happened in Egypt.  Egyptian barley on Egyptian land with Egyptian weather.  If conditions are to be duplicated as close as possible, for determining the first Biblical month, shouldn't the barley be checked in Egypt each year, where the event happened?

So many variables!  So many opinions!

The first new moon after the spring equinox would not have these variables.  Perhaps that is why Yahweh gave us the sun, the moon, and the stars to determine the seasons:

Gene 1:14 (KJS) And {Yahweh} said, Let there be lights in the firmament of the heaven to divide the day from the night; and let them be for signs, and for seasons (appointed times), and for days, and years...

Where does it say that he gave us barley to determine seasons (appointed times)?